A gentle, compassionate man with strong opinions, Richard was a decorated Air Force Veteran, a true renaissance man and visionary. Richard was a published author of numerous novels and books of poetry.  He was a published songwriter and performer, a painter and inventor, who enjoyed designing, restoring and flying his planes, fast cars and spending time with his family. 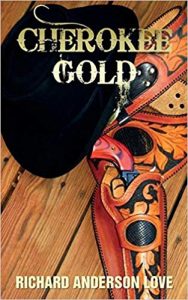 Cherokee Gold is a story that begins during the Civil War and continues into the “Reconstruction of the South.” Josh Stewart, a half-breed Cherokee Indian from Tennessee rescues Shamus Mc Gregor, a Texan, at the Battle of Shiloh. Moving his family to Texas after the war, Josh has a chance encounter with Shamus. Reunited, a deep friendship develops between their families. They join forces to battle outlaws who have discovered Josh’s secret. His secret of Cherokee Gold!

Welcome to our client project showcase! If you are looking to become a client and build your brand, you can contact us directly at emergentbehaviors.com